New Year’s Resolutions Not So Precise

Like life.."All the waves and water hasten towards goals; to the waterfalls, to the current, to the sea" Hermann Hesse (from Siddhartha) 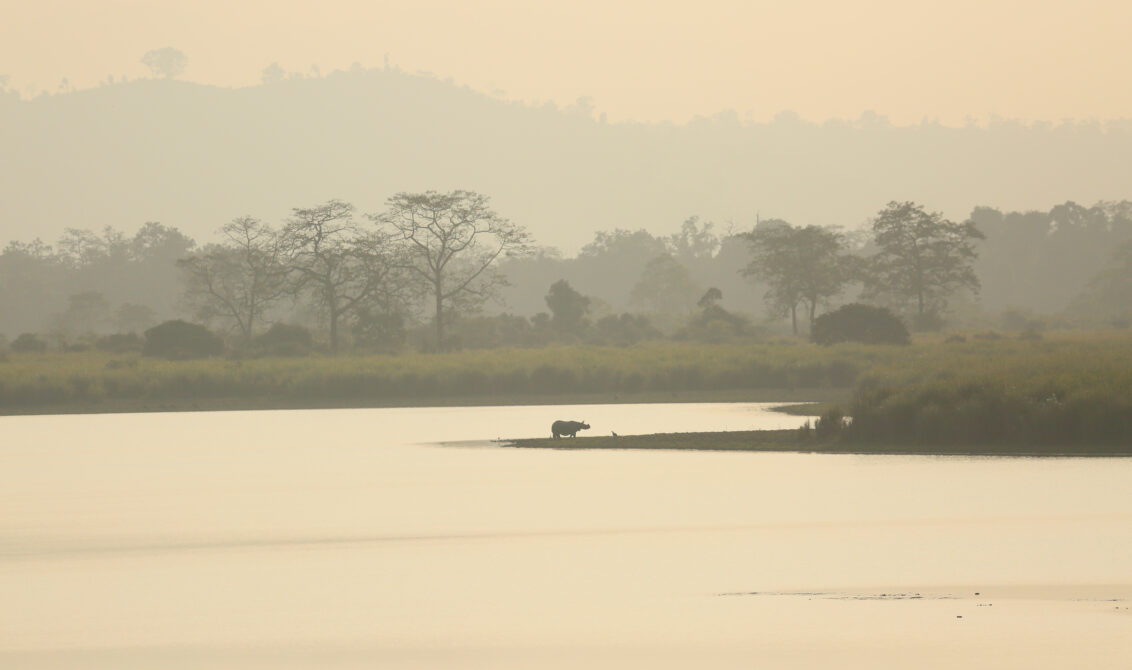 A  year after losing my husband Naren, my daughters and I planned his last rites — immersion of his ashes— to be performed in the Brahmaputra River in eastern India.  Six years ago, just Naren and I visited the area and Kaziranga National Park. We loved it so much that bringing him back there felt like the right choice.

As we flew over Russia en route from San Francisco to New Delhi, my two daughters, my son-in-law, and my 6-month-old grandson were treated to an expansive view of aurora Borealis — the Northern Lights — its sparkling green and yellow hues, from the window of our aircraft.

After a brief stay in Delhi, we took another plane, and then drove five hours to Kaziranga.  And it did not disappoint me. It was just as I had remembered.

In my religion, Hinduism, we cremate the body and usually perform the last rites in the Ganges, its most sacred river.  The registers and records of ancestral immersion have been kept there for centuries by the religious guides, the pandas.  This apparently informal system is quite accurate.  It is where death records are maintained and people can trace their male lineage.

For more than 3000 years, in Hindu homes in India and around the world, holy water from the Ganges is sprinkled during ceremonies marking a rite of passage.  But since the Ganges is now the most polluted large waterway in the world,  I opted for the pristine and fast-flowing Brahmaputra River instead.

As it roars down the Himalayas, the Brahmaputra deposits more than 600 metric tons of rich sediment per year. The sediment feeds the lush fauna. This wildlife sanctuary is home to rare and endangered mammals like the Bengal tiger and the one-horned rhinoceros and over 400 species of birds.  Its ability to awe visitors appealed to souls like Naren and me.  Verdant forests and sandy beaches pepper the Brahmaputra’s peaceful landscape.

The Indian rollers with feathers in every shade of blue, white-necked kingfishers, green pigeons, and black and white storks glide across the clear sky. More birds are perched in trees and others huddle among the rhinos around freshwater lakes. Then we saw gibbons — the closest cousins to humans — monkeys, langurs, 4-foot-long monitor lizards, and elephants.  I was struck by the relationship between the huge rhinos and tiny egrets, cleaning tick bugs off their bodies and also alerting them of predators.

Among these predators are the Bengal tigers who hunt wetland deer, the 20-foot-long king cobra, and the python.  Seeing the snakes as they basked in the sun, I remembered the snake charmers of my childhood. They brought cobras to our doorsteps and made them dance — for a small tip!

But on my mind was the almighty Brahmaputra. For the ash immersion, we dressed in traditional Indian attire and went to a ghat (river landing place).  We had arranged for a pundit-ji to perform the last rites.  We were the only ones on the ghat. We had a 10-minute boat ride to the tiny sand island where the puja (ceremonial worship) would be performed.  Then, I and my daughters would empty the ashes from the sacred urn into midstream water. The immersion is a reminder that life is as eternal as the flow of the river.  Then on pundit ji’s instruction, I would last let go of the urn and felt a sense of peace, knowing that Naren was now where he belonged. 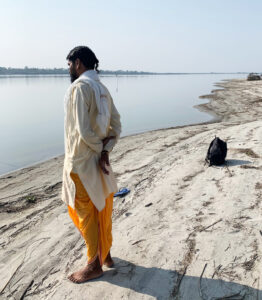 The tranquility of the place where life and fauna coexist reminded me of the symbiotic relationship that Naren and I had — strength in unity even though our individual goals were different.

Being raised in Hindu traditions, and then living and experiencing western culture, was also a reminder of how Hinduism has no boundaries, no initiations, and no conversion.  Like many deities we worship, Buddha is also considered an avatar of the Hindu god.  We exemplified Buddhist values as our own.  “Buddham saranam gacchami” a Bollywood song was chanted devotionally by my generation of kids, back in India.

The place where Buddha attained enlightenment in eastern India, was not too far from where we were.

With many such thought-provoking moments and moments of conflict with the mystique of Hindu practices, that no one fully understands, the trip was a bit overwhelming.  Internally, I began to wonder if  I am where I want to be.  Directionally I feel inspired to get my thinking in a better place.

Now, back in Silicon Valley, I am trying to reset my sails for my new future, enriched with old precious memories, experiences, and practices.  The serene setting of my luxury home where we raised our daughters, seems eternally peaceful.

The experiences of Silicon Valley taught Naren and me practical and humbling lessons, not unlike what a monk learns — a pursuit of honest self-assessment.   I need to continue nourishing my soul; this is the only New Year’s resolution that makes sense for me at the moment.

In Pursuit of Success
Next