Being a Tiger and a House-Cat at the Bridge Olympics

Emboldened by my three US National bridge titles in eight years, but rattled by my own bridge-slump earlier this year, I recently headed for the 15th World Bridge... 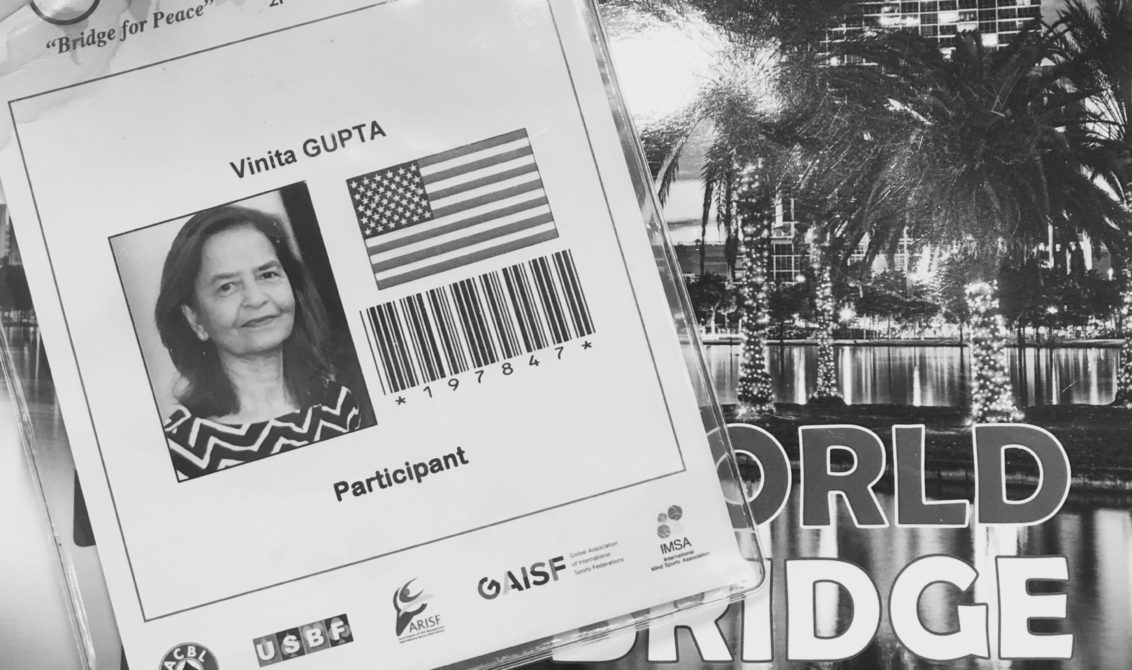 Emboldened by my three US National bridge titles in eight years, but rattled by my own bridge-slump earlier this year, I recently headed for the 15th World Bridge Series in Orlando — my first and maybe my last international bridge Olympiad.

The tournament was a roller coaster ride all the way — filled with disappointments and thrills. I discovered that I needed the mindset of a tiger and a house-cat —  fearless, contemplative, patient, yet ready to pounce.

Alas, I missed the bronze medal by two places — in women’s pairs-event.  I had naively set my hopes too high.  Still, for an amateur like me, ending as the 5th best international pair, amongst women, is a big achievement and I am still reliving those moments.

I started playing bridge seriously eight years ago after turning 60 — most professionals start playing full-time bridge when they are much younger and have decades of experience.

The pairs-event stood out because I played 100% of the time with my professional partner and coach Debbie Rosenberg. We competed against many professional-duos. Six 7-hour days of grueling matches and preparing myself psychologically every morning was more than a full-time task. Having a tiger’s mindset at the table kept me charged up while the house-cat in me kept looking for the opportunities where I could outshine others.

Both Debbie and I were dejected after losing our respective teams-events, earlier.  Fortunately, we had made plan B just days before we left from Silicon Valley for Orlando.

The next six days at the international championships turned out to be exhilarating where I got a chance to experience my full potential by playing 100% of the time as it was just Debbie and me.  In teams-events I only played 50% of the time — as there are six players and only four play at a time — to avoid fatigue.

Bridge is simple but an intricate game, making it intoxicating for both experts and beginners. Brilliance and stupidity can get mixed up, making bridge-play a humbling experience.

How to play bridge is more complex, but simply speaking:

Since every player gets to see his 13 cards and 13 more cards of the exposed hand,  all one has to do is guess critical cards of one more player — and magically the fourth player’s cards get revealed.

These guesses are made by drawing conclusions from the bidding, and tracking cards as they are played out.  When no other clues are present one uses probabilities of distribution of cards as outlined in bridge Encyclopedia.

Bridge experiences are unique because at times even the best players can play poorly if the mental plane is not level set. Additionally for an amateur,  playing against world-class players can be nerve wrecking.

Since the beginning of this year, I had been in a slump for some inexplicable reason.   I shared my worries and received valuable advice: ”It becomes impossible to play if you think opponents are being tricky.” “Everyone has bad sets.” “Disaster and success are neighbors.”  One of the most charismatic players, Zia Mahmood, summed it up for me: “What’s most important is your inner self,” and “Bridge is easy if you know what to think when.”

The advice came in handy. Eventually, I concluded that no one wins while feeling inadequate.  I had to develop a mindset of being fearless like a tiger, but preserve my confidence with a bit of vanity, like a house-cat.   My fifth-place finish, therefore, came as a delightful surprise, marking an end of my slump.

As I contemplate my next phase, in bridge, it becomes pertinent to ask why.  Mastering bridge is impossible as the learning never stops — which also applies to life in general.  I’ve learned the difference between being too careful and being undisciplined, facing up to what I do and don’t know, and recognizing that skills need a strong foundation.

Bridge requires total honesty with oneself. Even though the journey can be treacherous, I hope to seek the experience of fierce competitions that can transcend me.

Only in America
Next